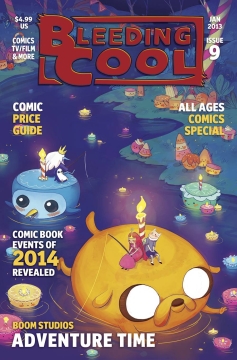 Description: 2014: What time is it? Adventure Time! Join us as the biggest kids comics in the world join the freshest cartoon on television to create an issue like no other. Bleeding Cool Magazine also welcomes you to 2014 with the major events of the upcoming year revealed. What creators are working on new properties and how do they relate to your collecting? RICH JOHNSTON gives the lowdown on what to look for and what to bank on in the world of comic books! Join us for the Watchmen retrospective - a time to look at what is still considered the definitive Alan Moore creation. BRENDON CONNELY takes us behind the scenes of the biggest upcoming movies with exclusive photos and scoops on Hollywood's super events. Tired of seeing everyone profit from their comics but you? Get ahead of the curve with Comics To Cash and Vintage Paper to see where the next big back issue explosion will happen. Delivering over 100 pages per issue on a bi-monthly release schedule, each issue is full of articles that are NOT AVAILABLE ON THE WEB!