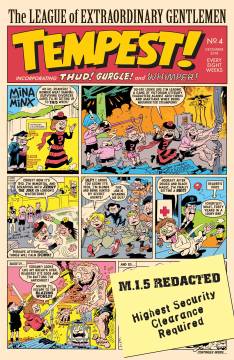 Description: 2019: Legendary swords clash atop the Paris Opera in 1913, while almost a century later a declining London witnesses assassination attempts, summit meetings in Haggerston Park, and the catastrophic return of a 1960s super-adventurer. Elsewhere, in the four-dimensional territories adjacent to the North Pole, a lost Shakespeare play sees its first and last performance, while Queen Gloriana's conjurer finally reveals the nature of his five-hundred-year-old game. Topping off an already heady mixture, this issue's classic Seven Stars reprint depicts our halcyon heroes as 'Captives of the Creepyverse,' another reason not to miss the unfolding of Moore and O'Neill's fulgurant finale in issue four of The League of Extraordinary Gentlemen, Volume IV: The Tempest.