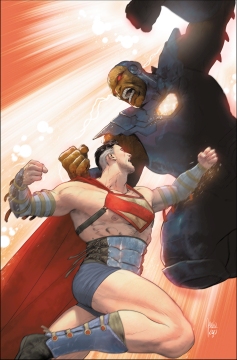 Description: 2022: It has all led to this: the final battle between Superman and Mongul, and between the Authority and Mongul's Unmade Champions! The identity of the hooded stranger has been revealed, uncovering a shocking betrayal that threatens to crush Superman's rebellion forever! But as the fate of Warworld relies on Superman, the last chance to return his powers now lies with Natasha and John Henry Irons. From the visionary creative team of Phillip Kennedy Johnson, Brandon Peterson, and Will Conrad, empires fall and rise and the fourth world is reborn in this jaw-dropping final chapter!